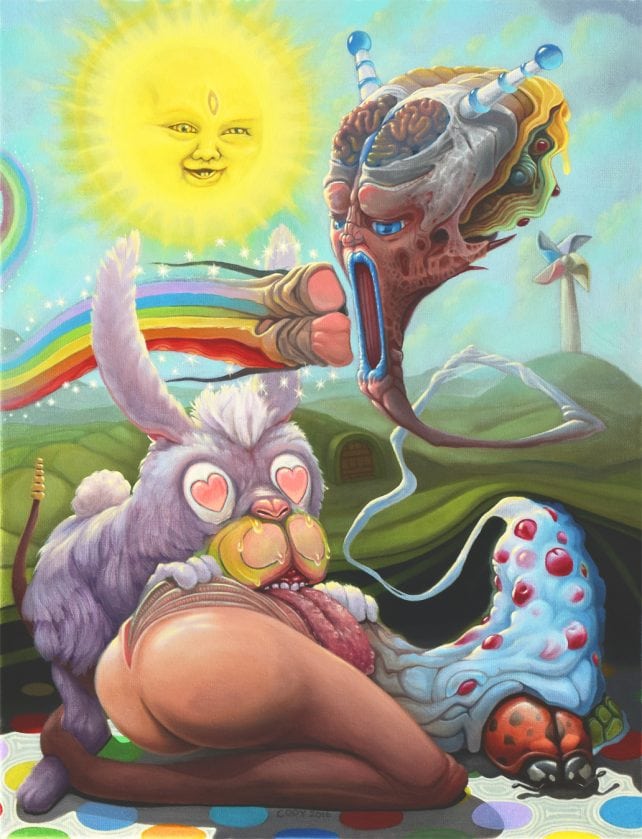 January 8th, 2017 Cody will participate once more in the annual Tarot exhibition held by the Hive Gallery and Studios in Los Angeles.  Seekins himself has a deep history of interest and association to the symbolism of the Tarot archetypes, having first indulged into the mystery and meaning as a young teen.  In late teen and early adult years he collected various decks, eventually finding his most “familiar” deck to be the beautifully crafted Aleister Crowley Thoth collection.

“The Star” and “The Universe” Major Arcana cards from the Thoth deck.

The Crowlean deck is of course a very modern interpretation, not merely within the larger tradition of the Tarot, but within the occult canon specifically.  Originally Tarot cards began as playing cards, a sort of Magic the Gathering of antiquity, which later evolved into a system of archetypes  designed to provoke the intuitions of the given oracle.  The common Bicycle playing card deck known to most, having 4 suits, derived from the Minor Arcana. The Joker wild card addition to the modern deck possesses similarity in both its role and sometimes visual appearance, to the traditional Major Arcana image of “The Fool”.  A decent visual example of this can be inferred from the Industrie und Glück Tarot’s “Fool” : A quite famous occult interpretation is the Rider-Waite Tarot, originally published circa 1910.  This deck stands now as an interstice between the old aesthetic occult interpretation and the new.  It is also the foundation that the Hive Gallery chooses as its reference for its participating artists to consider for each of its annual events. Each year The Hive assigns a selection of artists to represent each one of the cards, either of the Minor or Major Arcana suits.  This January 8th, Cody will present his “The Lovers”, as one of 22 Major Arcana artists: A visual comparison of Seekins interpretation (left) next to the classical Rider-Waite.(right)

The full artist roster and their card assignments include:

Seekins’ first Tarot card for the Hive was the “Page of Wands” in 2009: And then again in 2011 with the Major Arcana “The Empress”: Each new Tarot interpretation brings with it a unique opportunity to not merely consider a new archetype to express, but also, occurring each in different periods of life, a new set of living impressions from which to construct the image.  To this end Seekins has enjoyed what is becoming a kind of tradition in his relationship to the Hive, which at this stage has extended over 7 years.