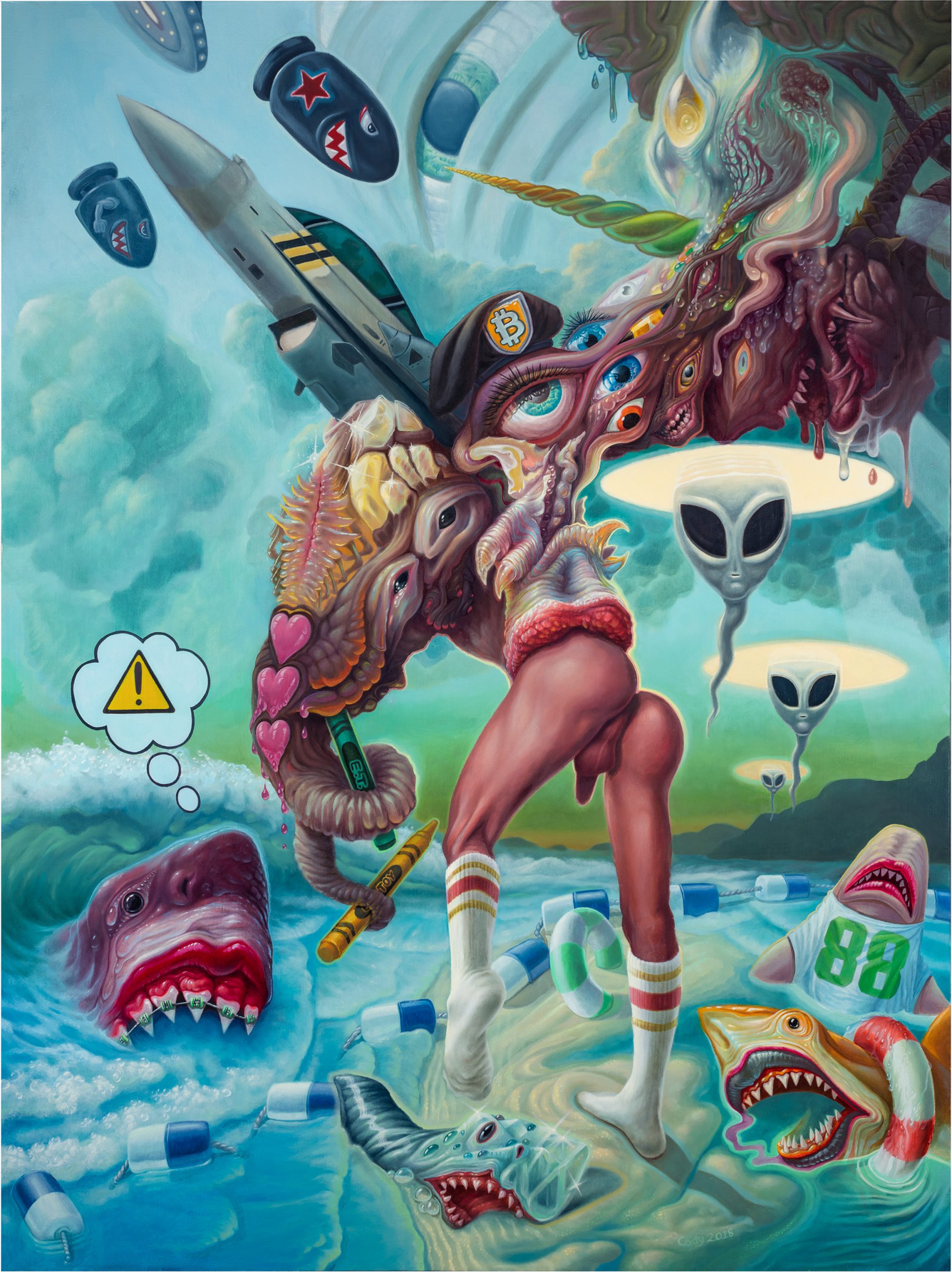 A figure, Alex, stands mostly naked in the midst of a physical and psychological maelstrom.  He is clad only in nostalgic 80’s era socks, on a tenuous island between active waters and a variety of shark denizens.  Sharks on the right side of the image are all beached, including a shark with a quartz crystal snout, an orange shark wrapped in a life buoy, and a shark further in the distance wearing an 80’s style shirt with the number “88”.  On the left side is the largest shark, wearing bright glossy red lipstick and  brandishing prominent teeth with braces.  She is cordoned off from the figure by a roped float divider, and within her thought bubble is a warning symbol.

Behind the figure, hovering in the air, are Grey aliens emerging from the distance, out of a series of elliptical UFO shaped interdimensional membranes. The Greys take on the visual form of spermazoa ostensibly impregnating the interdimensional thresholds.  As is typical, these Greys inhabit a zone just behind the unconscious topology of Alex’s dissociative mind.

Though Alex’s bottom half is representative, his top half mutates into a  psychological cornucopia.  In a manner akin to “Auto-Erotic Sphinx”, a predecessor work, the figure has self suctioned—an act of sensual infatuation, enjoyment, and exploration.

Upward exists the figure’s primary conscious eye, adorned with a revolutionary beret emblazoned with a Bitcoin badge.  The figure’s summit features the nose of a fighter jet facing off against Mario Brothers Bullet Bills, one of whom is marked by a communist North Korean star.  A cropped section of a UFO observes the contest.

Alex’s mind branches both left and right.  To the left is more singular embodied consciousness, manifesting two eyes and a Ganesh trunk grasping crayons.  The right branch dissociates upward diagonally, emerging into an array of eyes, faces, teeth, tail, a unicorn horn, and much more—all of which participate in expressing his unconscious being;  a democracy of psychic factions representing thought impressions and associations.  All illumination and darkness– fernal, infernal, high consciousness and corporeal underbelly–reside in this realm.

In the distance are relatively languid, light clouds, and against the firmament hovers  a colossal distant eye peering over the scene and far beyond.

This painting possesses underlying genetic traits with previous works such as “Auto-Erotic Sphinx with Toys”, “Dionysus”, and “Fuku-Shiva”.  The work serves also as a nod to an earlier period of art inspiration during late teens and early twenties— born out of the nakedness, vulnerability, curiosity, and wonder inherent to coming of age and all subsequent psychedelic revelation.