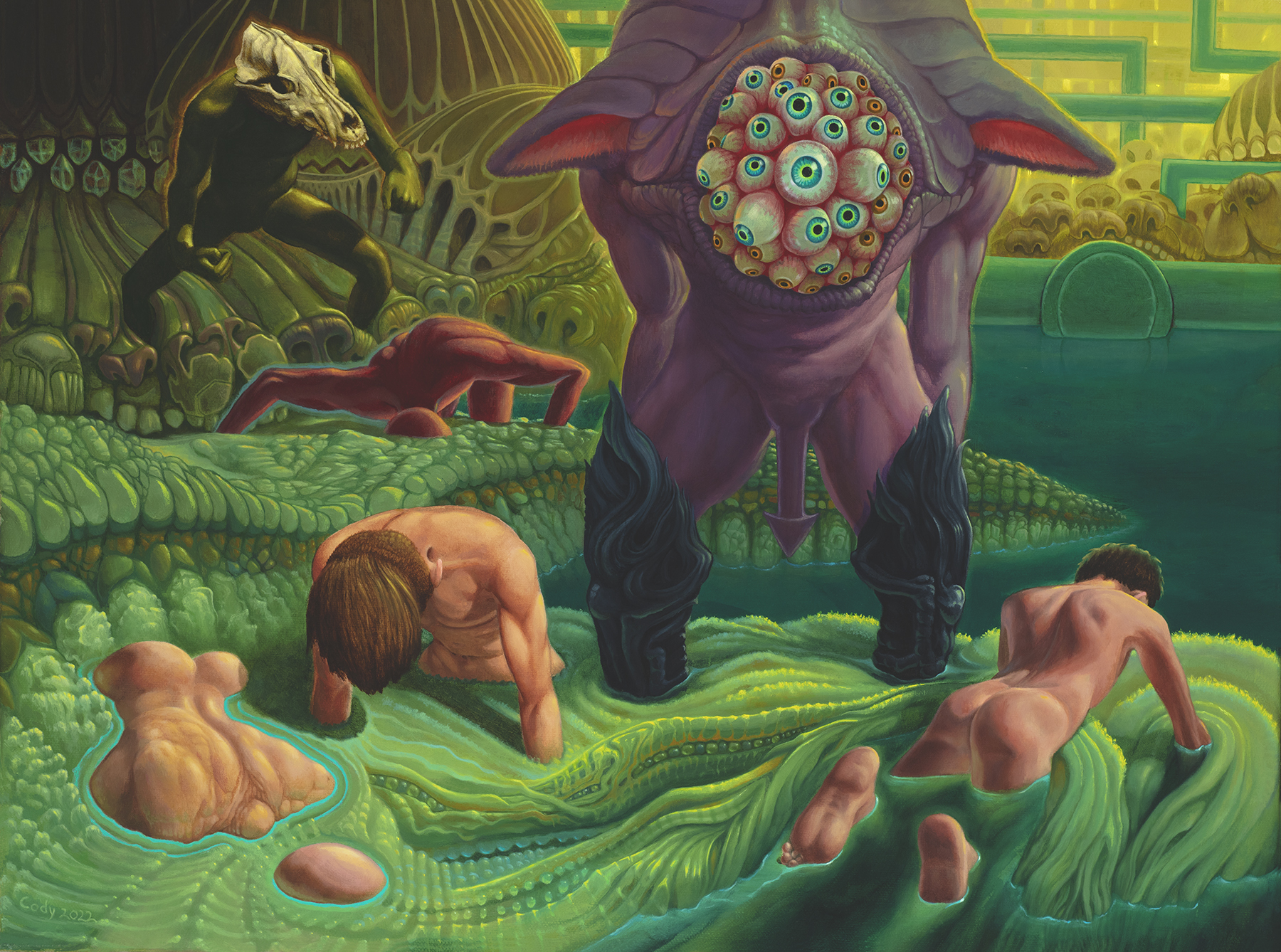 A variety of nude figures inhabit a rich green bog, its terrain anthropomorphic and industrial.  The young humans of the foreground find no footing, struggling individually to not be overtaken by the mire.

Presiding over them is the immense purple Shepherd, a kind of lamb-eared, well-endowed, many-eyed cyclops.  Like the uncivilized ancient Greek cyclopes, who were also shepherds, giant, and known as beings of great potential for strength and force, The Shepherd in this scene easily dominates his domain.  His presence serves to moderate the stage.  Although he does not assist the boys struggling beneath him, he nonetheless stands between them and a voracious Wendigo in the background.

The Wendigo, its head a wolf-skull, violently humiliates the red figure beneath him, as a display of aggression and predation.  At the Wendigo’s feet the land transfigures into rows of noses, and teeth, in various states of metamorphism and malign intent.

The far background develops into two essential hemispheres. The scene to the left becomes a blockade of yet more vestigial iteration and teeth. To the right the scene moves deep and distant, revealing an industrial network of pipes.  This zone is also infested by more noses, and teeth, which transfigure into grey alien heads peaking at the viewer.

“The Shepherd” borrows inspiration from an earlier painting of mine titled “The Harvest”, and shares many of its phylogenetic traits, such as the large masculine figure and the swamped bodies. The landscape, particularly the foreground and midground, also inherited influence from former traditions in Western art, such as the Rococo period.

This work is in part a meditation on different expressions of dominance, achieved passively as in the case of the Shepherd, or aggressively as with the Wendigo.

The painting was built over the course of development of persistent economic inflation and decline in world markets, disruption in supply chains, and covid lockdowns, all of which are reflected in the stagnant scene, where participants struggle for traction, and where it seems the calm insightful strong reserve of the prime figure might “hodl” a clue for surviving the path.