A Survey of My Development as an Artist, Part 2 (Jataka Tales and the Academy)

In part 1  we explored a snapshot of my evolution from a psychedelic catalyst, roughly during the year 1998, up to the introduction of a new series of works circa 2010.

The very first image that belongs to the new series was a small painting of a budgie, which I titled “Budgie-Sattva 1”.  It was an homage to a pet parakeet from my childhood, who had shown me a very profound love and companionship before her tragic death. 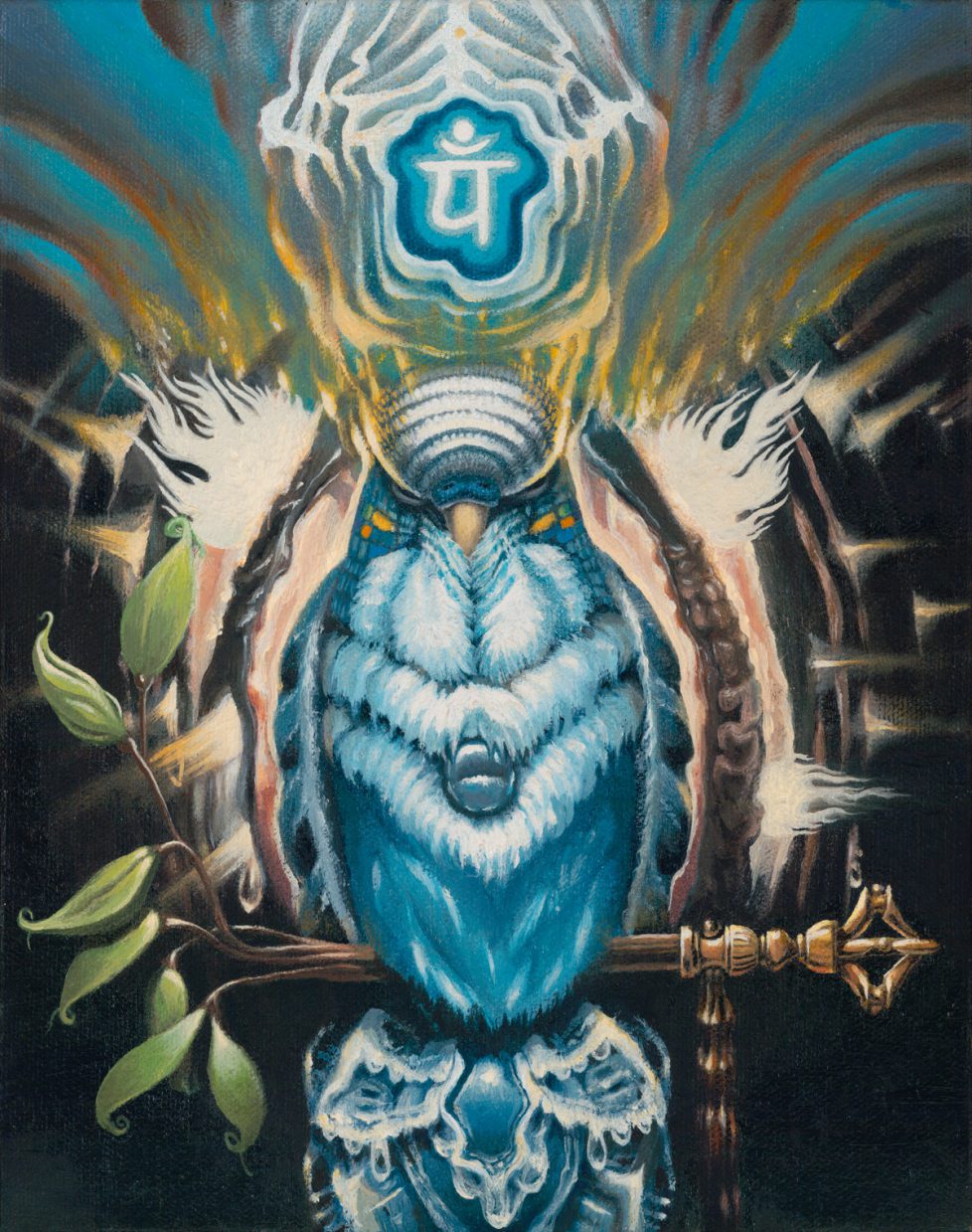 The term, “Budgie-Sattva” is a play upon the word “Bodhisattva” (BO-DEE-SOT-VUH) from Buddhism, which loosely refers to any soul, no matter how gradual, who is on the path to awareness and Nirvana.  More specifically, it can also refer to a guide who has very little “dust in their eyes”, being one who perhaps has attained the penultimate awareness next to Buddha.  Within the narratives of my art,  the Budgies represent the latter, and the human figure (below) represents the former.

The other essential player to this narrative, the young man, came into being in 2010:

Now the stage was set, the human and bird companions would find themselves in new incarnations throughout a series of adventures, which I coined “The Jataka Tales of a Budgie-Sattva”.  The first in this lineage was called “The Psychonaut” (below): 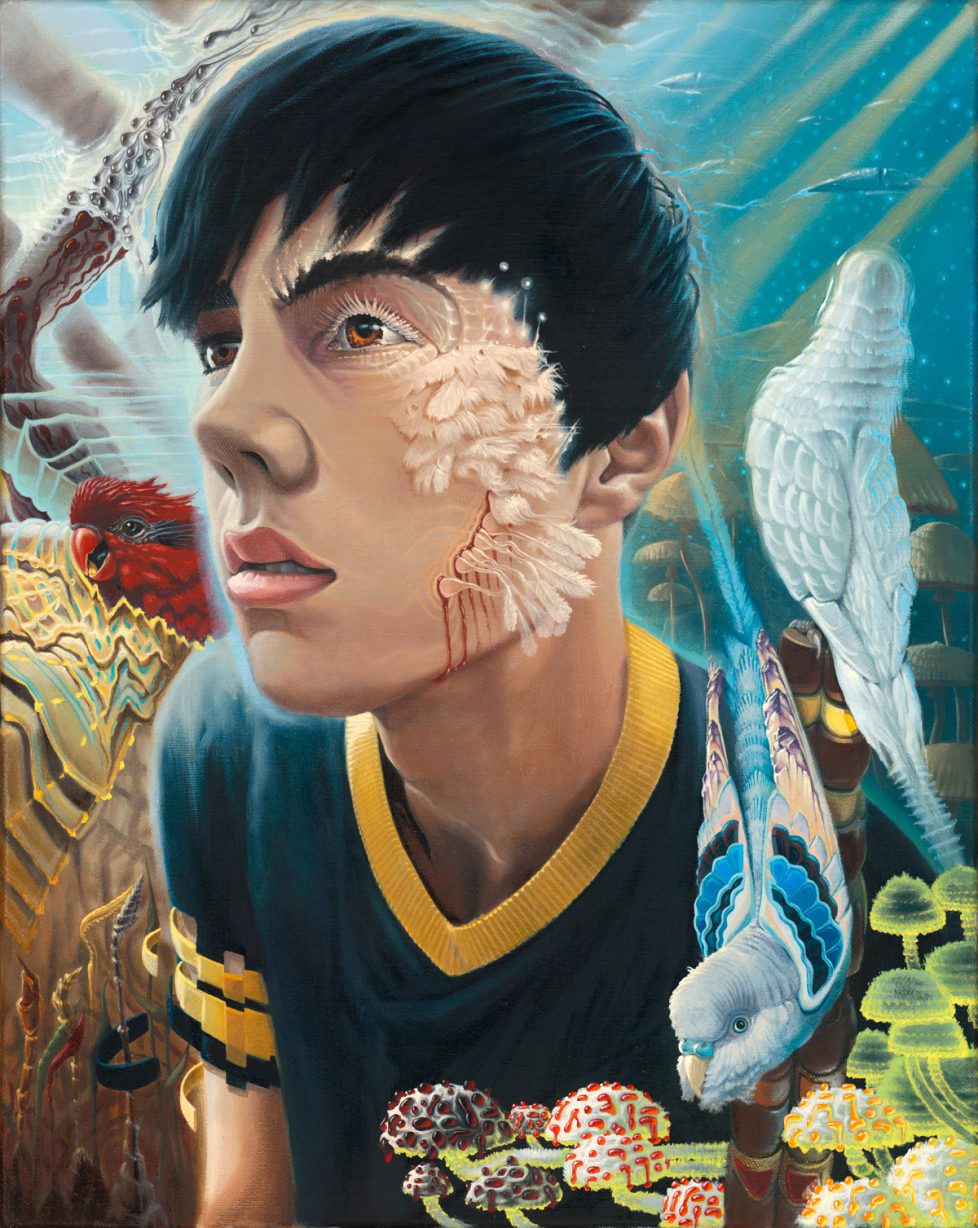 The term “Jataka Tales” or “Jatakas” is an allusion to the allegorical Buddhist stories of the same name, which detail the various past lives of Gautama Buddha before his incarnation as the one who would obtain perfect being.

In those traditional stories, the identity of each incarnation was fixed to a separate human life via reincarnation.  Within my narrative, each distinct facet of identity served as a separate incarnation, but within one literal human life.

The boys in the works were the protagonists, whereas the birds were treated as more of a companion in spirit, or a force of nature.  Therefore, there could be multiple budgies in the image (or their influence), all of which served as instantiations of the avian “Budgie-Sattva”.  The human seeker (Seekins), was singular, at least within the instance of a painting.  Over the course of multiple paintings; however, the human figure “reincarnates” into a range of different identities. 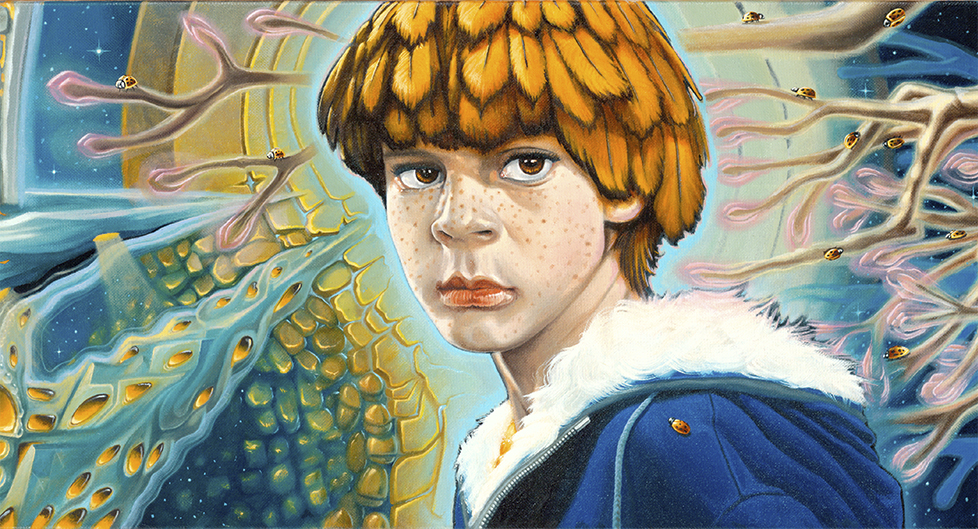 In the “Vagabond”, the figure begins to mutate and adapt avian characteristics of the Budgie-Sattva.  Additionally, the work begins to reference popular culture, visually alluding to the protagonist, Bastion, of the 1984 film, “The Never Ending Story”.

The parrot form of the Budgie-Sattva also appeared in their own boutique imagery separate from the human figure. 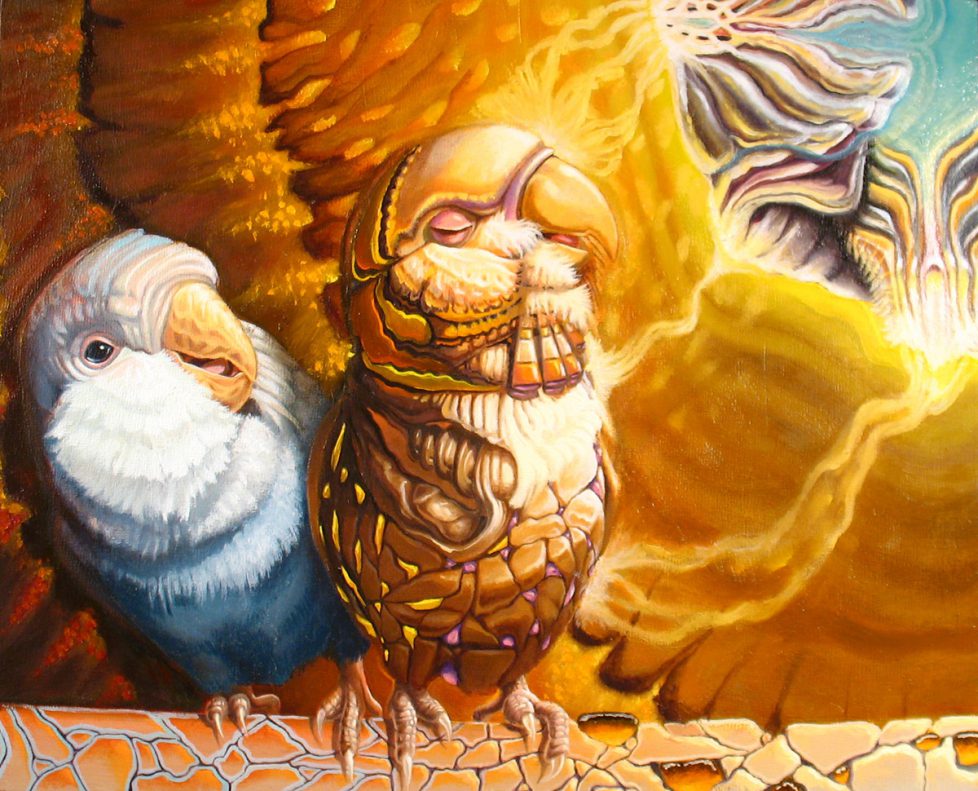 It was around this time that I began to participate in shows at the Hive Gallery & Studios in L.A., producing thematic works related to the narratives of their exhibits, such as “Page of Wands: Prodigal Son”: 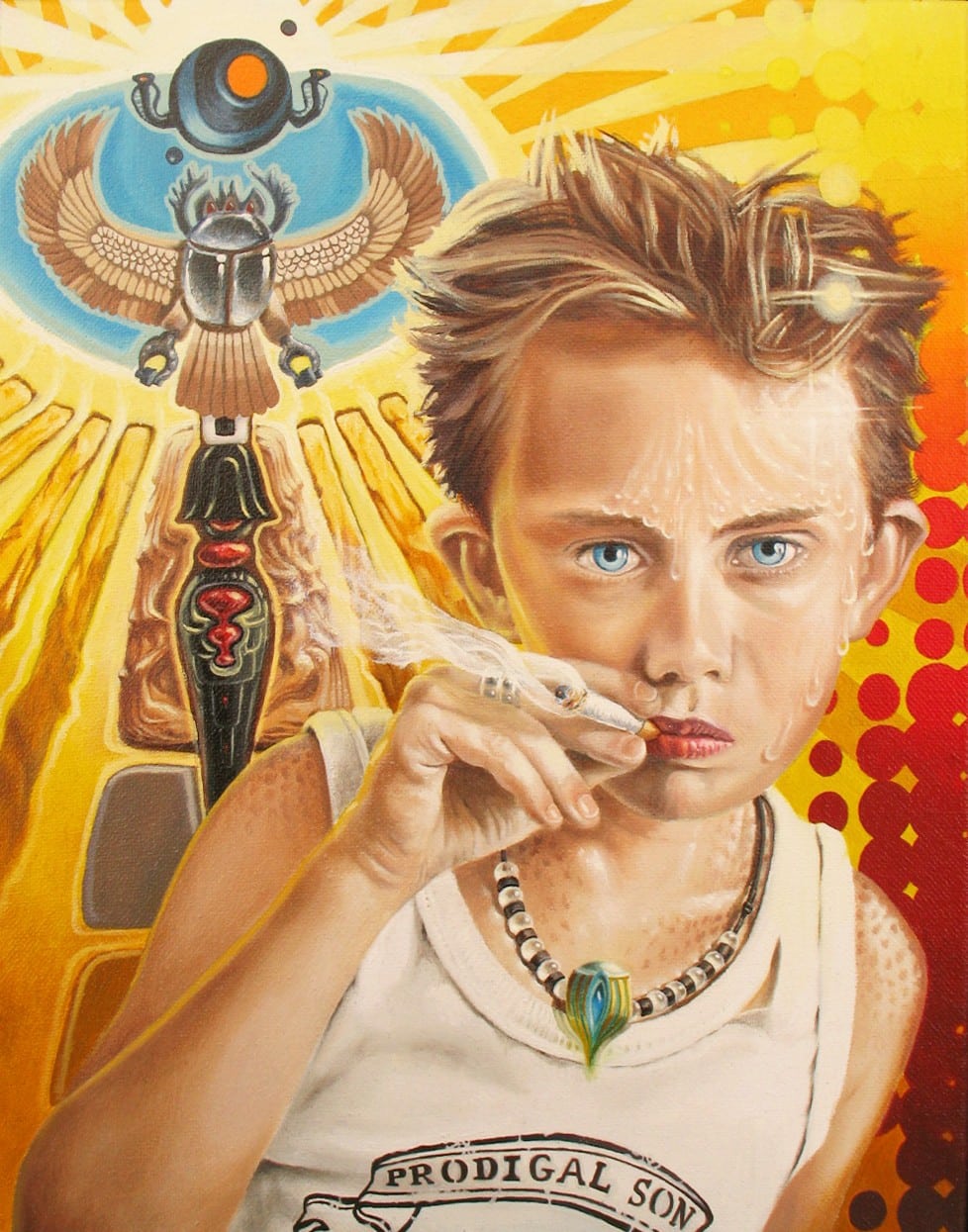 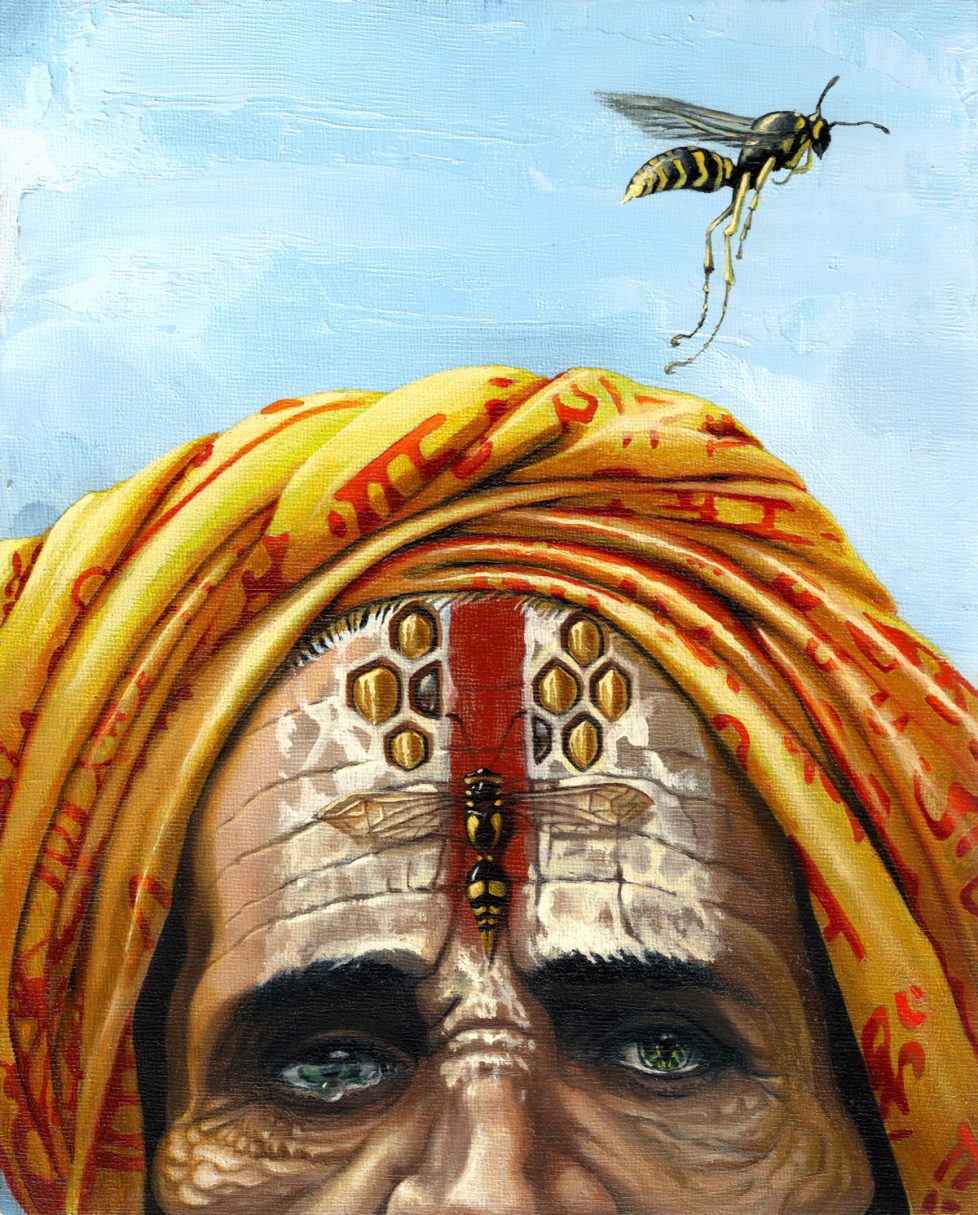 2011 in a way represented a new paradigm of art making born from the old.  That which was originally inspired by emergence theory and a psychedelic deconstructionist process; which necessarily omitted the suggestions or identity of “the other”, now began to integrate not just affiliation with the identities of a larger culture, but participation as well.

Ultimately the agenda was, and still is, the same–the continual refinement of subjective perception into a more complete model, expressing itself through the continuum of my paintings.

To complete my process it had become necessary to consider a rigorous Academic art education.  Why this was necessary was personal, and for the same set of underlying reasons why I value both non-ordinary consciousness and sober consciousness.  That reason, simply, was comprehension.

I have seen, on the one hand, artists specialize in impressive graffiti or emergent psychedelic visuals, to then only fail miserably when they attempt to render a figure or an object.  On the other side of that spectrum I’ve also witnessed artists from a classical background, who might create impressive representations of figure, still life, or scene, to only fail in elevating the representation beyond its Uncanny Valley.

Although it is an individual’s prerogative to cultivate personal process, I found myself wanting the competence to have not only a psychedelic tool set that could, in analogue, translate mind into medium, but also to have the skill to simply be able to make a hand, that really looks like a hand.  That is to say, whether it is premeditated, or emergent, I want to make sure the result looks exactly how it should.

(To this end, it would be unsurprising if I delve into hyper realism at some point in my career)

In 2011, I furthered my practice through the Graduate program at The Academy of Art University of San Francisco.  Specifically, I found myself involved in the Fine Art in Painting program, with a focus on figurative painting.

The program was indeed heavily oriented on classical art education and technique.  This paired perfectly as a balance to my emergent psychedelic work.  My thesis, as it turns out, was an expansion of the “Jataka Tales” theme, which I proposed as “The Jataka Tales of a Budgie-Sattva”, and was my primary focus for those few years.

One of the first images produced from that frame: 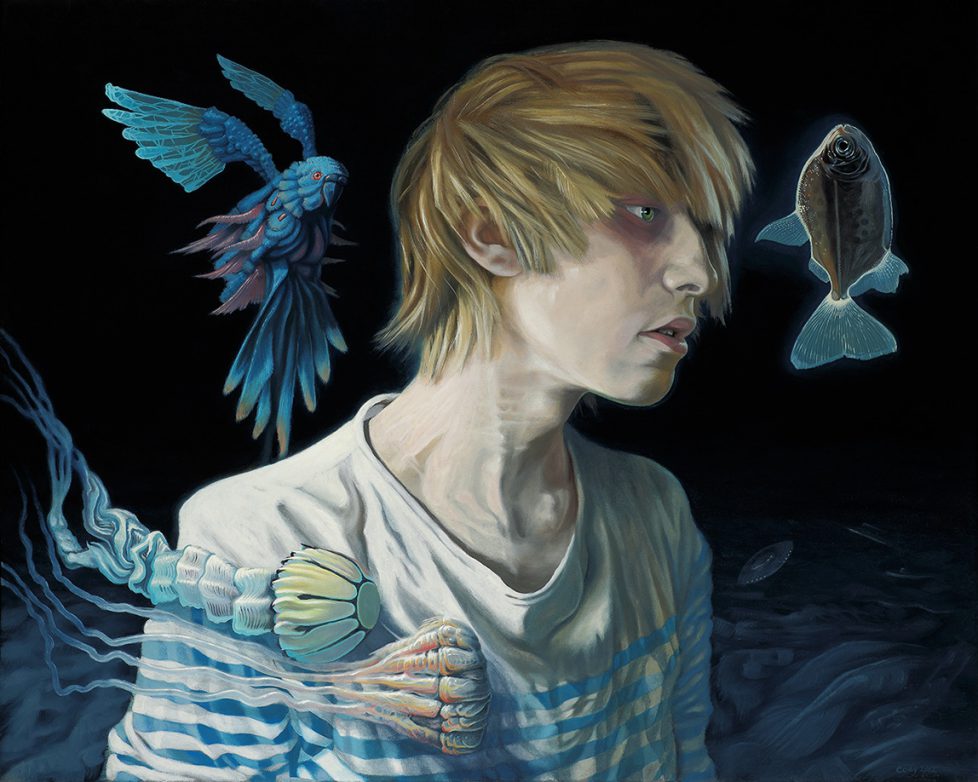 In this work, a much more pronounced figurative dominance weighs into the image.  The emergent psychedelic phenomena are mostly bounded within the avian “Budgie-Sattva”, as seen below, or in subtle mutations of the figure, such as the suggestion of gills on his throat. 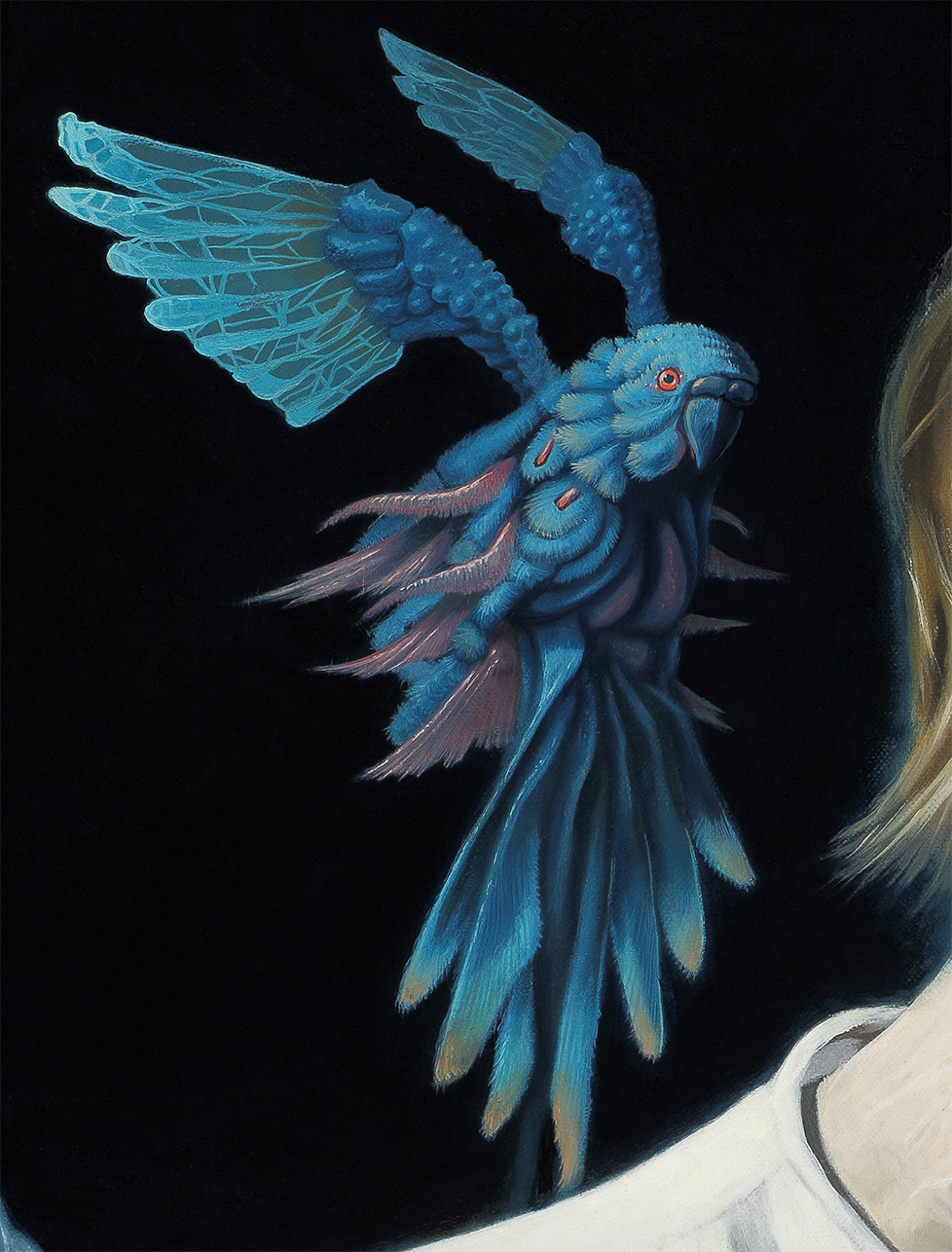 In this aquatic themed narrative, the bird exhibits morphological tendencies of shrimp and crustacean.

Here also we can see a new addition to the broader narrative of the Jataka Tales; the “Aqua-Sattva” or teacher fish, seen instructing the youth on his “3rd Eye” (and which served simultaneously as an association to the “all seeing eye” of occult symbolism). 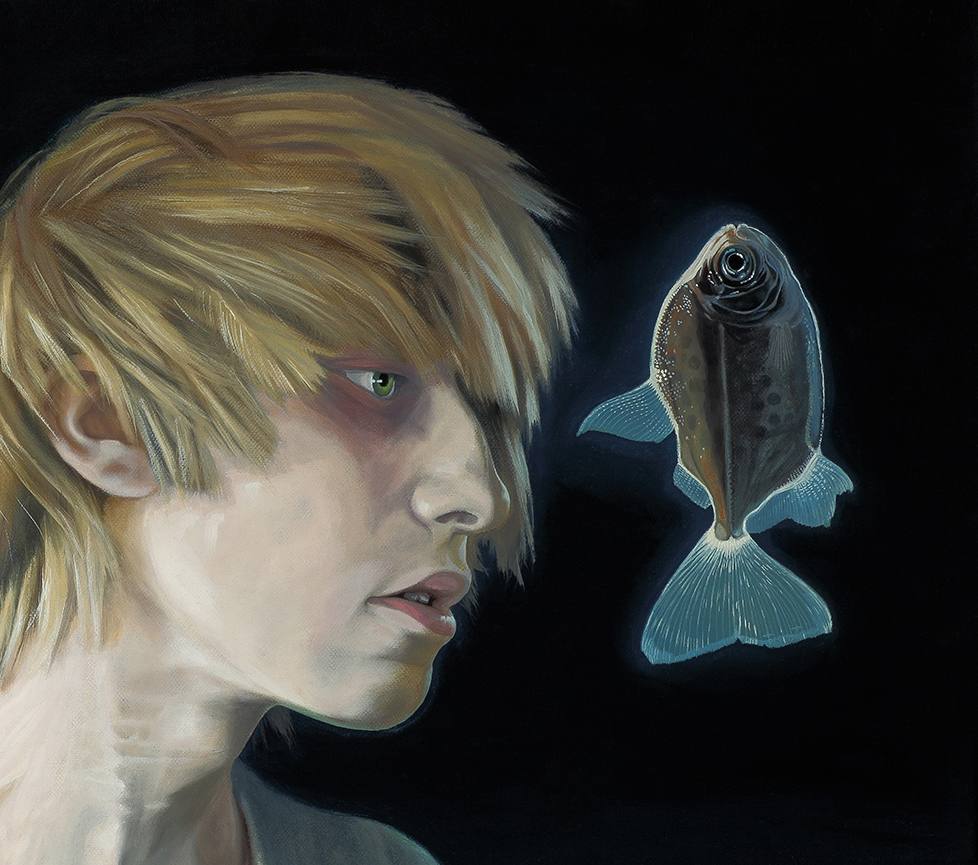 Detail: Position and architecture of the fish also associates to the “Eye of Providence”.

My approach to the composition of works changed.  Emergent regions had their own negotiated real estate within the scene.  Conscious, rather than unconscious decisions, were given the priority and responsibility to stage the choreography. 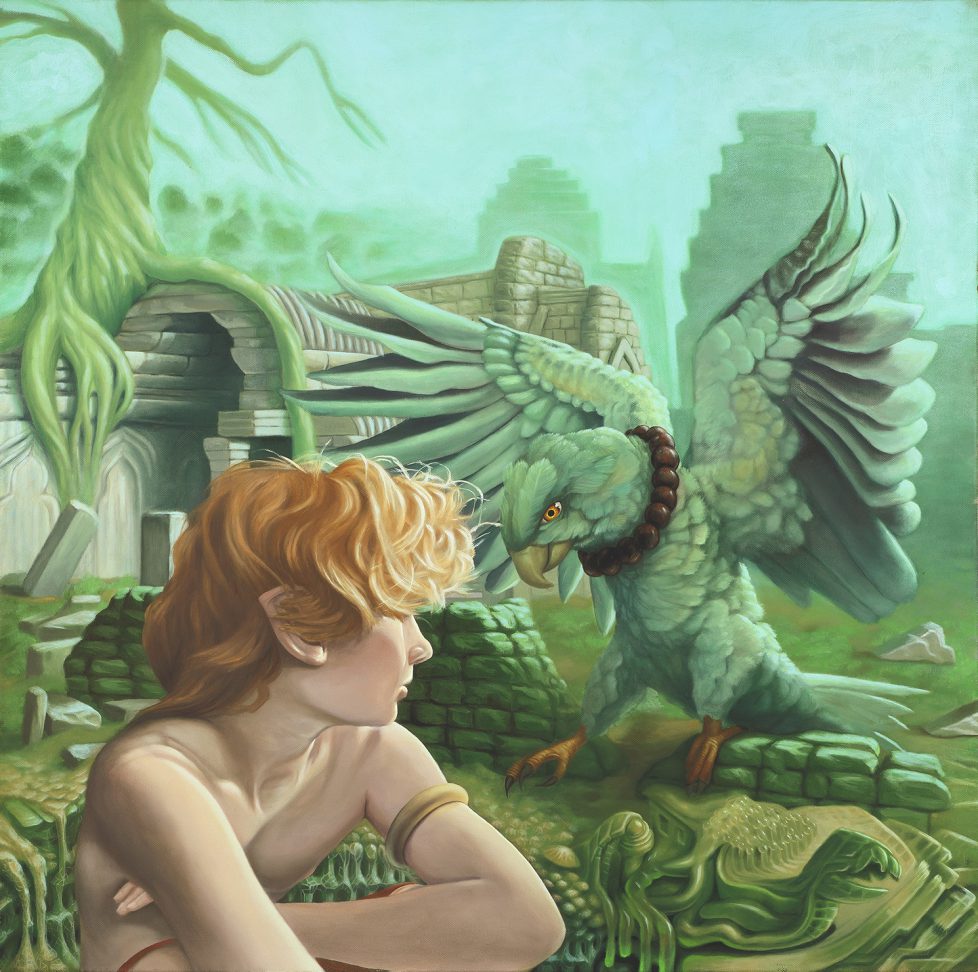 We can see this clearly in “Relinquishing Culture”; the psychedelic elements are largely in the midground, a negotiated space between the boy figure and the large parrot in this tropical scene.  The use of other elements, be it the architecture or flora; however, serve a conscious purpose for circulating the eye, relating concepts,  and framing the figures.

Notice, too, that compared to earlier works, the young male figures seem to take on more individualism.  Here, the boy’s style is quite distinct from the figure of the Wet Dream, as is the environment.  This distinction continued to clarify the works from one another, such as this incarnation of a trans-human “Budgie-Sattva”: 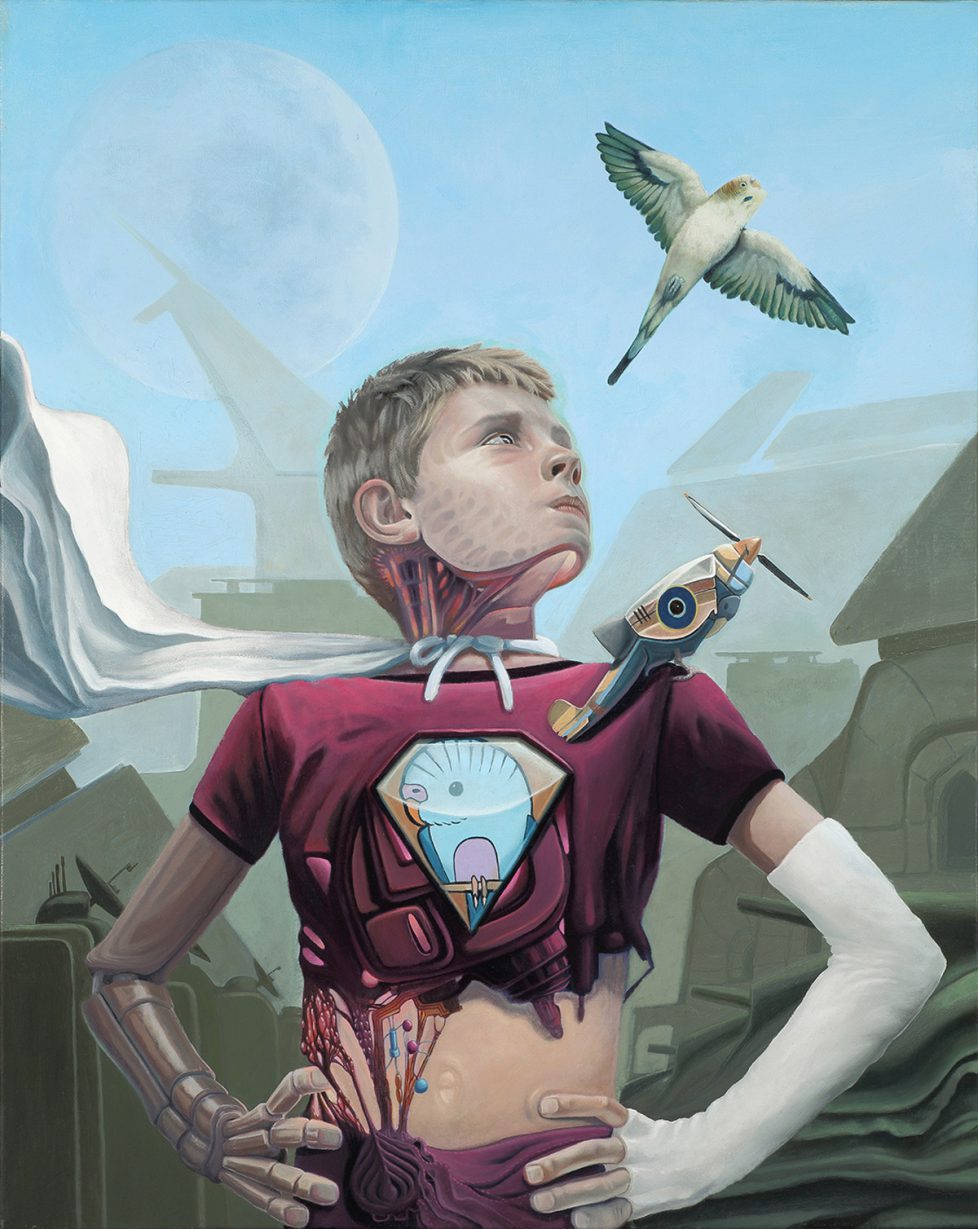 Whereas “Relinquishing Culture” possessed fantasy and tropical Southeast Asian influences, the identity of “Automaton” lay more concretely in the experience of being a military brat growing up, and the variety of associations produced from that.  The trend of the bird morphing to suit the scene continues here, with one bird (in flight) camouflaged to match the colors of the scene, whereas the bird on the boy’s shoulder had transformed into a vintage military machine.

Concurrent to my main thesis, I did also produce some works which gave more priority and real estate to emergent imagery, such as “Caravan of My Inner Child”: 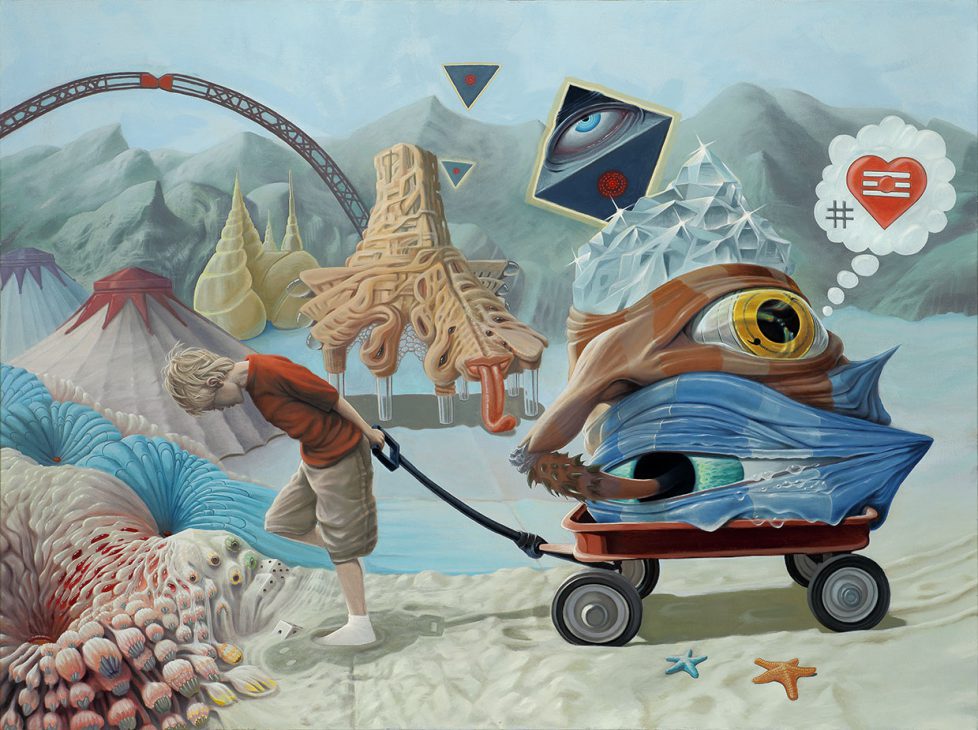 As well as “Theta Vyrus”, a 2013 rendition of an older graphite drawing. 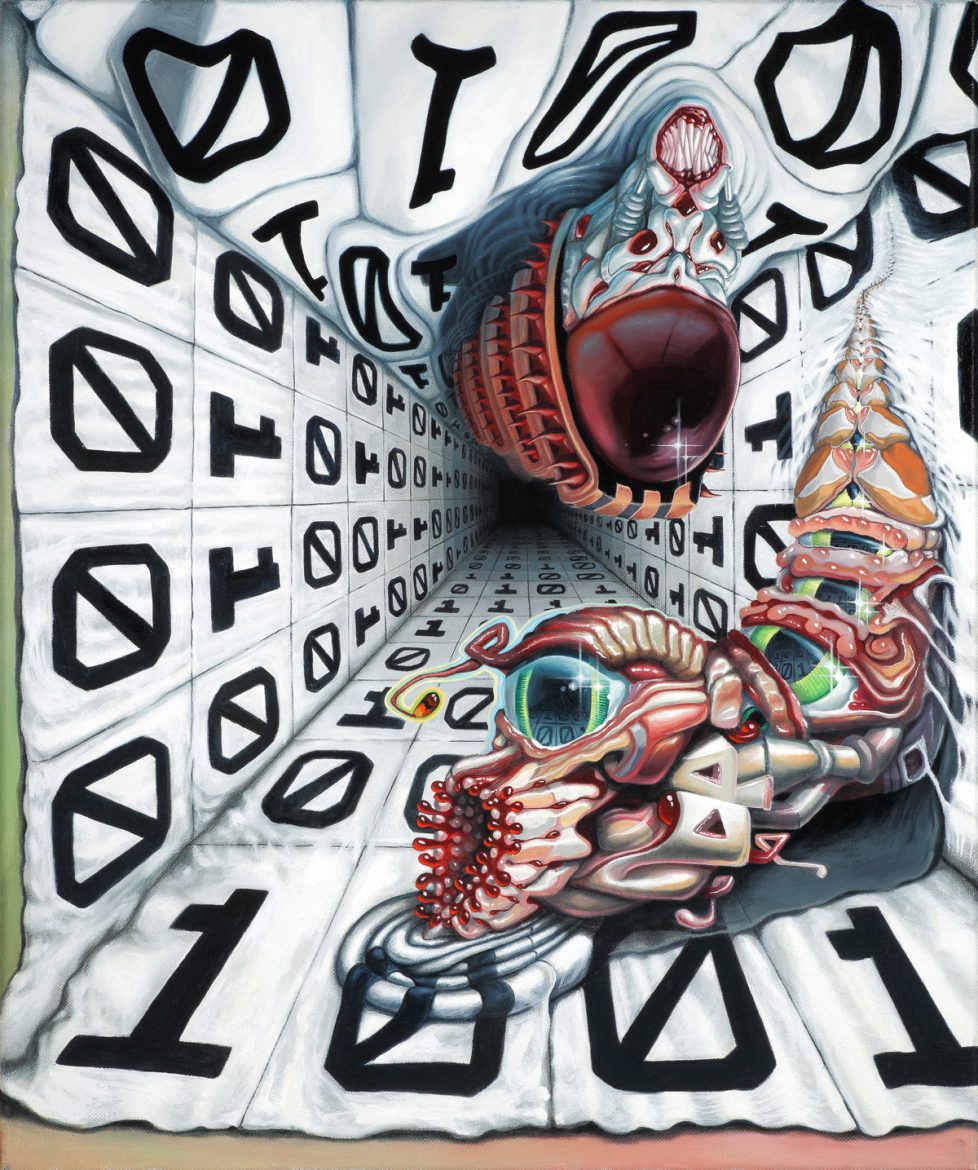 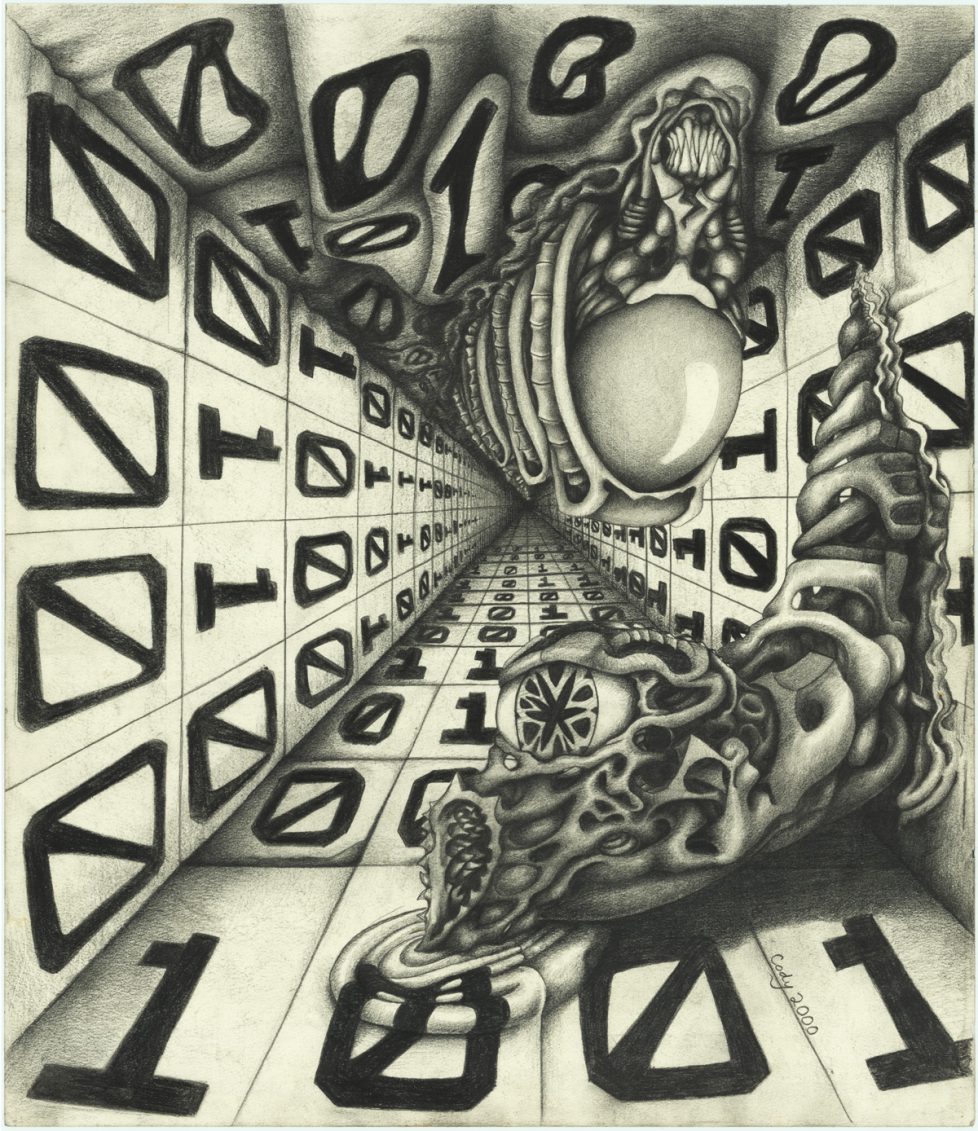 However, my prime focus continued to adhere to the standards of my thesis, which included works, such as this one, relating to the day my Budgie (who inspired the entire series), was killed: 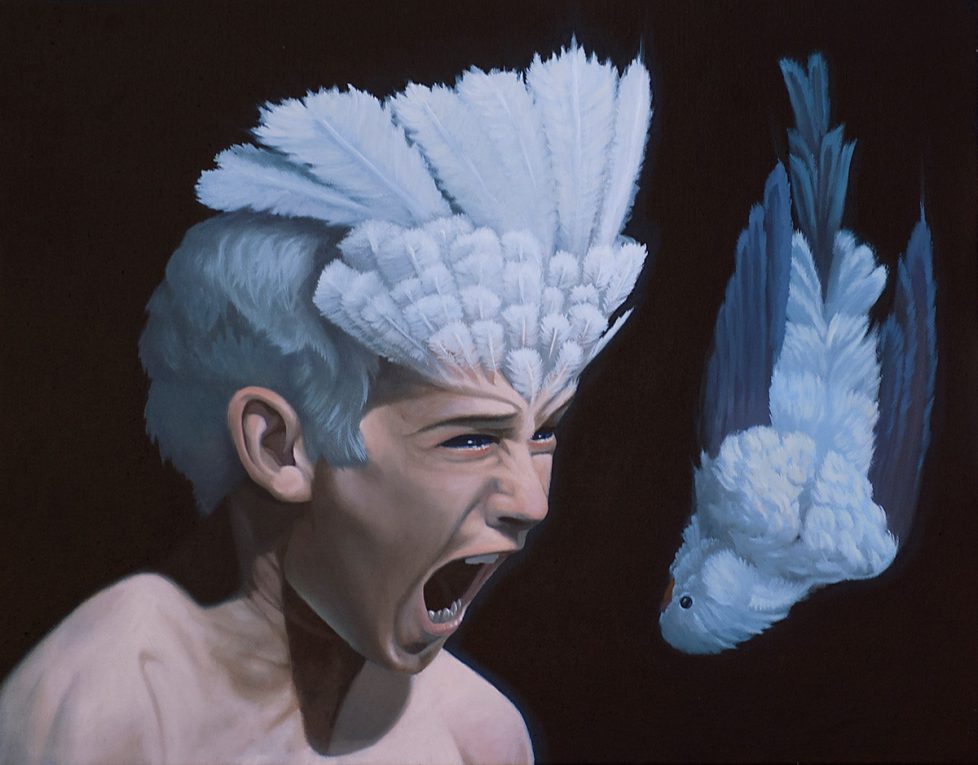 Of all the work that I produced within the context of the Graduate School environment, that which was the most realized and purely academic was “The Encounter”: 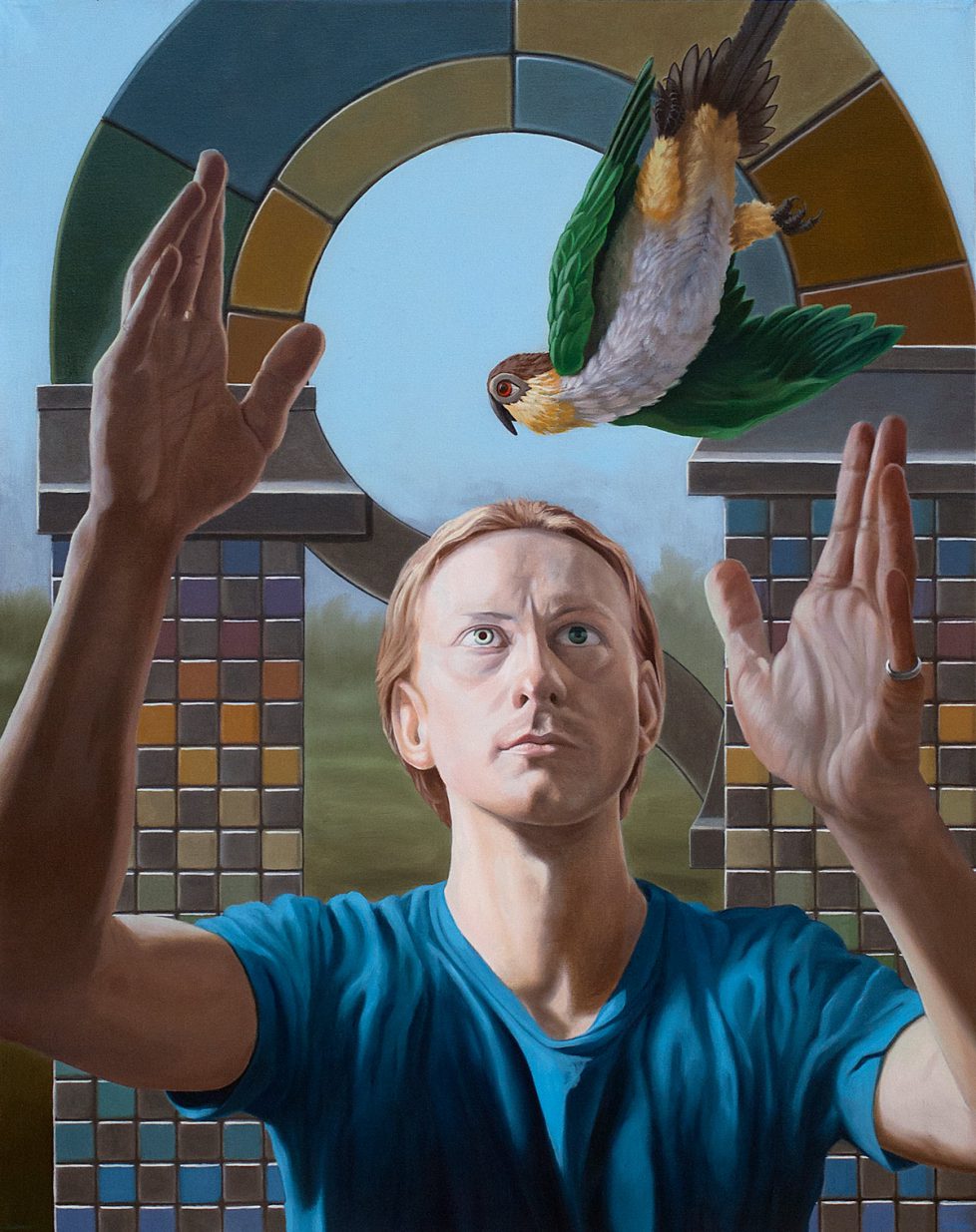 This work embodied the purest principles which I’d hoped to obtain, in that it was entirely premeditated.  It’s considerations were first measured, then executed, with no allowance for spontaneous emergence.  Though such policies are not and will never be hardened ideologies within my process, it is significant in that it was a successful fulfillment of something I had originally struggled with as a child, as well as being a counter balance to a purely emergent execution.

Furthermore, I felt as though it embodied the best nexus between myself and the Academy.  I am honored to have observed that they chose it, therefore, as a positive representation of what their Graduates produce, as seen in this promotion article.

I obtained my Masters in Fine Art in June 2013.  I continue to carry techniques and considerations forward into my current work to this day.

Stay tuned for the 3rd and final article, which will cover work development from post Graduation to the present.